The first thing I thought of when I got to see the Our Lady of the Most Holy Rosary of Orani church for the first time was I felt like I just traveled through time. The old architectural design of the church was quite distinct and almost served as a time capsule, making me feel like I just traveled back in time. This is unsurprising knowing the fact that this church has a rich history and regarded as one of the most renowned churches in Bataan.

More commonly referred to as “Orani Church,” it became an independent parish, detaching itself from the Parish of Samal, on April 21, 1714. Their patroness saint, Nuestra Senora del Rosario de Orani, known as “Virgen Milagrosa”,  has carried out miracles for the town of Orani. The church looks amazing now but it was made of feeble materials like nipa leaves, molave wood, and bamboo when it was first constructed in the 1600s. Then in 1723, it was improved and made better with stronger roofing materials and used more robust materials like adobe and stone as its foundation.

An unfortunate event happened to Orani church when an earthquake struck and made significant damage to the chapel on September 16, 1852. This was just after when the church was renovated in both the years 1792 and 1836 by the Dominican friars who also built the church’s convent. Disasters did not stop there, though. A huge fire broke out on March 27, 1870, which devastated the two structures.

Much like any other old churches in the country that has a rich history, Orani church has made improvements to its facilities and equipment. The addition of GreenMango’s Vento which is a simple, 5-blade, high-volume low-speed (HVLS) fan that comes in two sizes, 22 feet, and 16 feet. Vento is best for commercial spaces that demand comfort and wind speed.

It’s suited for sports such as fitness clubs, gym/athletic training stadium, recreation & entertainment such as amusement park, zoos, children’s playground, traffic hubs such as airport, railway station, and bus station, commercial places such as function center, shops, restaurants, supermarkets, and others uses such as warehouses, factories, museums, and outdoor venues. A significant event happened to Orani Church on September 25, 2012, cementing its legacy as one of the most symbolic churches in the country. 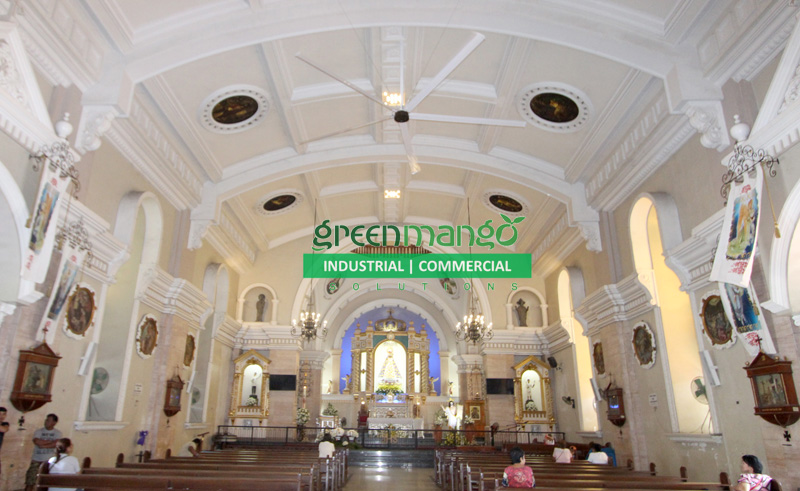 OUR LADY OF THE MOST HOLY ROSARY PARISH ORANI

Pope Benedict XVI blessed the Church of Orani with an everlasting spiritual affinity bond with the Basilica of St. Mary Major in Rome. Making those who say their prayers in Orani church have the same spiritual privileges and benefits as if they prayed in the Basilica in Rome. This granted status as an affiliate church of the Basilica of St. Mary Major in Rome gives Orani church a unique distinction among the other churches in the country. With its rich history, Orani church will continue to serve the Filipinos and all peoples of the world through teaching, preaching, and living out the words of our Lord.

Brisa is an 8-blade 14-ft HVLS fan with seamed edge design with fluorocarbon paint technology. The fan blade tail is meteor-inspired that when the fan is turned on the tail will result in a gorgeously beautiful silhouette. The unique middle cover hides the intersection of the shell and fan blade, making the design even more luxurious adaptive to all design and structures. Brisa is perfect for small sports paces and commercial such as restaurant and small to medium retail centers . Read More >>>

Gale is specifically designed like an umbrella where fans and ACs can’t be installed on ceilings. Gale can be installed with billboards, lightings, fences or even benches. Read More >>>

Gust is a a large fan with air volume comparable to 20 units of industrial fans. Gale fans can be installed on tight or complicated places including walls, beams and posts. Read More >>>

Xana is a 2 meter movable fan that has 4 wheels with a durable steel frame. Xana can be moved anywhere despite its size. Its strong durable frame is rust and water proof. Read More >>>

Kaze fan series is especially made for residential purposes. Kaze fan makes you feel the natural breeze right at our own home. It’s perfect for comfortable homes for families. Read More >>>

Ask for Quotations And get recommendation on you site absolutely free!

What are the specifications?

Here are the features and specifications of all GreenMango HVLS Fans. Compare our industrial, commercial and residential HVLS fans to check what fits your specification.

Absolutely. We will install everything and teach you how to operate our products and a few troubleshooting tips. We need to inspect though the site where the installation will occur.

Can I ask for discounts?

You should. We are open for discussions. We’ll grant huge discounts for more volume purchases.

What is GreenMango Solutions' track record?

We haven’t received any complaint yet about our installations and products. That itself speak for themselves.  In fact, our clients when we started are still with us. In fact, we are commissioned as the provider for ventilation solutions of the 51st International Eucharistic Congress held last 2016 in Cebu Philippines. Since we have installed on many churches in the Philippines, it comes naturally that we were recommended to offer ventilation solutions for the said event.

Contact Us Now And get recommendation on you site absolutely free!

Complete The Form Below

Make sure to type in your correct mobile number. We will call you as soon as possible.