We a have numerous churches that were named after Sta. Clara de Montefalco here in the Philippines because the Spanish Augustinians were the first Christian religious order that brought forth the beginning the conversion to Catholicism of our beloved country and Sta Clara de Montefalco was an Augustinian nun, herself.

Who was Saint Clare of Montefalco?

Clare was born into a wealthy family in 1268. At a very you age, she and her older sister, Joan, together with her friend, Andreola, lived as Franciscan tertiaries as part of the Secular Third Order of Saint Francis.

In 1290, Clare, her sister Joan, and their companions entered the monastic life in a more strict manner as the Third Order of St. Francis (Regular) with the help of Bishop of Spoleto who established their monastery in Montefalco according to the Rule of St. Augustine. This was when they made their vows to the three-fold rule of poverty, chastity, and obedience and became an Augustinian nun. Reluctant at first, Clare was elected as an abbess or head of an abbey of nuns when Joan, who had the position first, died in 1291.

Perhaps the most significant event in Clare’s spiritual life happened in 1294 when she fell in a state of trance for weeks where she could not eat. The other nuns took care of her by giving her water mixed with sugar make sure she stays alive. After that long and grueling experience, Clare began to have visions. She recounted one of her visions in which she was being appraised and judged in front of God. Another vision Clare had was an inconceivable encounter with Jesus.

She described His appearance as being dressed as a pitiful wanderer, carrying this large cross and looking like he is out of breath and fatigued. Clare got down to one of her knees and tried to stop Him. She then asked, “My Lord, where art Thou going?” Jesus answered her, “I have looked all over the world for a strong place where to plant this Cross firmly, and I have not found any”. After she reached for the cross, making known her desire to help Him carry it, He said to her, “Clare, I have found a place for My cross here. I have finally found someone to whom I can trust My cross,” and Jesus implanted it in her heart. The tremendous pain Clare endured at the time the crossed was placed in her heart stayed with her for the rest of her life. Yet, the extreme suffering did not deter her and she continued to serve her duty as an abbess. Clare died in 1318.

Following her death, her heart was removed from her body for inspection. It was stated that a crucifix and a scourge were found in her heart.  She canonized on Dec. 8, 1881, by Pope Leo XIII.

Sta. Clara de Montefalco’s faith, persistence, and resolve are just some of the reasons why a few churches in the Philippines were named after her honor. Like the Sta. Clara de Montefalco church in Pasay City which is one of the oldest in the city having been founded during the Spanish era in 1864. Its parochial school was being governed by the RVM (Religious of the Virgin Mary) sisters.

As with old churches, it has gone through countless improvements and renovations. The addition of GreenMango’s Vento which is a simple, 5-blade, high-volume low-speed (HVLS) fan that comes in two sizes, 22 feet, and 16 feet. Vento is best for commercial spaces that demands comfort and wind speed. It’s suited for sports such as fitness clubs, gym/athletic training stadium, recreation & entertainment such as amusement park, zoos, children’s playground, traffic hubs such as airport, railway station, and bus station, commercial places such as function center, shops, restaurants, supermarkets, and others uses such as warehouses, factories, museums, and outdoor venues. 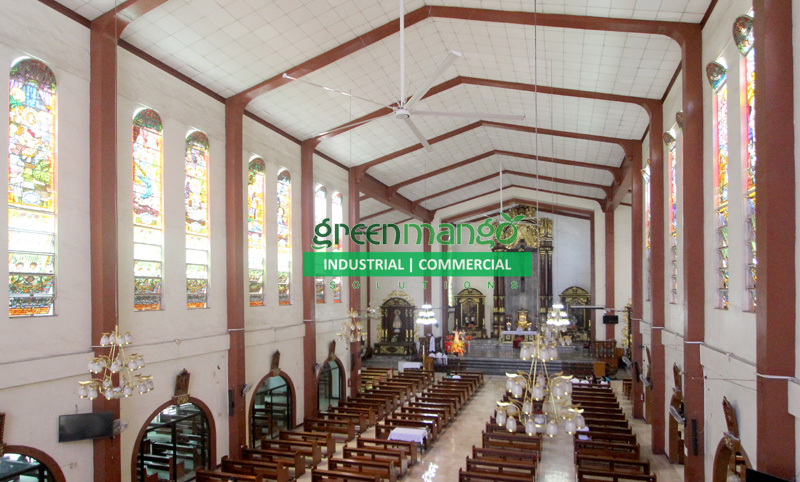 The Sta. Clara de Montefalco Parish will continue to serve as the seed of faith of the people and be a symbol of unity, charity, and community — a heritage of tradition, culture, and history.

Brisa is an 8-blade 14-ft HVLS fan with seamed edge design with fluorocarbon paint technology. The fan blade tail is meteor-inspired that when the fan is turned on the tail will result in a gorgeously beautiful silhouette. The unique middle cover hides the intersection of the shell and fan blade, making the design even more luxurious adaptive to all design and structures. Brisa is perfect for small sports paces and commercial such as restaurant and small to medium retail centers . Read More >>>

Gale is specifically designed like an umbrella where fans and ACs can’t be installed on ceilings. Gale can be installed with billboards, lightings, fences or even benches. Read More >>>

Gust is a a large fan with air volume comparable to 20 units of industrial fans. Gale fans can be installed on tight or complicated places including walls, beams and posts. Read More >>>

Xana is a 2 meter movable fan that has 4 wheels with a durable steel frame. Xana can be moved anywhere despite its size. Its strong durable frame is rust and water proof. Read More >>>

Kaze fan series is especially made for residential purposes. Kaze fan makes you feel the natural breeze right at our own home. It’s perfect for comfortable homes for families. Read More >>>

Ask for Quotations And get recommendation on you site absolutely free!

What are the specifications?

Here are the features and specifications of all GreenMango HVLS Fans. Compare our industrial, commercial and residential HVLS fans to check what fits your specification.

Absolutely. We will install everything and teach you how to operate our products and a few troubleshooting tips. We need to inspect though the site where the installation will occur.

Can I ask for discounts?

You should. We are open for discussions. We’ll grant huge discounts for more volume purchases.

What is GreenMango Solutions' track record?

We haven’t received any complaint yet about our installations and products. That itself speak for themselves.  In fact, our clients when we started are still with us. In fact, we are commissioned as the provider for ventilation solutions of the 51st International Eucharistic Congress held last 2016 in Cebu Philippines. Since we have installed on many churches in the Philippines, it comes naturally that we were recommended to offer ventilation solutions for the said event.

Contact Us Now And get recommendation on you site absolutely free!

Complete The Form Below

Make sure to type in your correct mobile number. We will call you as soon as possible.